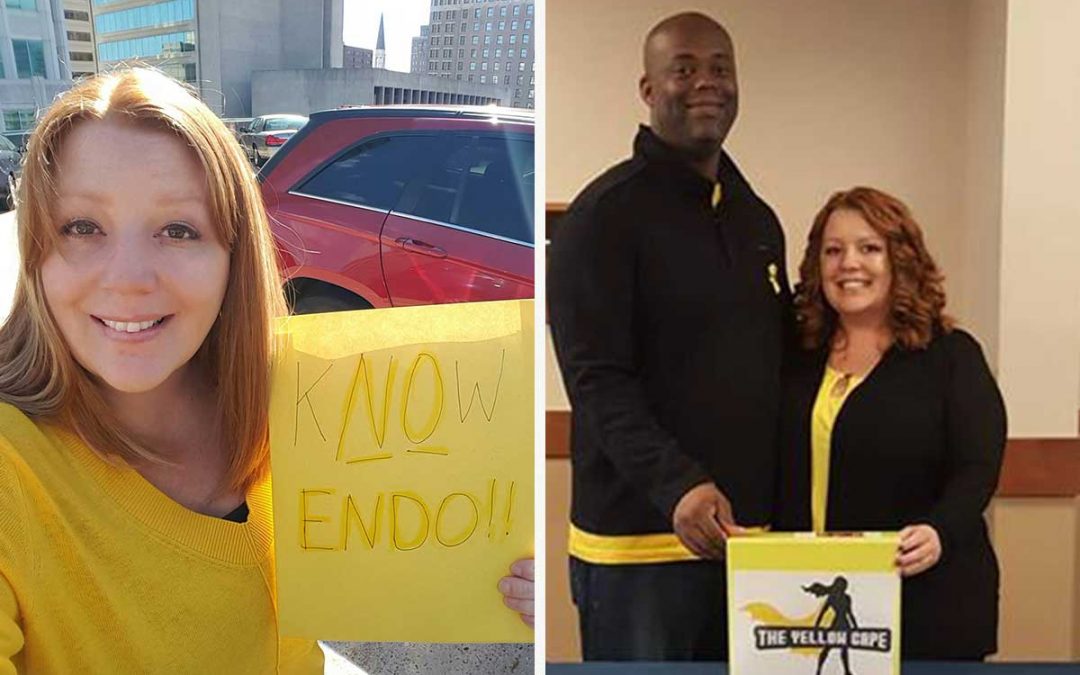 At The Endometriosis & Pelvic Pain Center, we believe it is important to know you are not alone. The purpose of the Make a Difference series is to highlight the dedicated organizations and individuals in the community available to help you on your journey.

Tara Hilton has battled endometriosis for over 25 years and has learned that the key to a better prognosis is early detection. From speaking at the Worldwide EndoMarch in Washington, D.C. to leading the charge in Delaware to declare March as Endometriosis Awareness Month, Tara defines the word advocate in every fashion. Her signature yellow uterus and determination to change the world one uterus at a time will truly impact and raise awareness in the Delaware community and beyond.

Founded in 2017, The Yellow Cape’s goal is to provide information, resources, mentors and advocacy to those battling and/or affected by endometriosis. They believe that no one should have to fight endometriosis alone!

Can you tell us about the start-up of The Yellow Cape and what was your biggest inspiration?

Tara: The Yellow Cape, Inc. (TYC) is a registered 501(c)(3) Non-Profit dedicated to help women battling endometriosis as well as their support system. We were founded in March 2017 and I operated as an individual contributor for several years prior.
I truly believe early detection is critical in battling endometriosis and I also believe if I had the proper resources, it would have made a drastic impact on my journey. The biggest inspiration is to make sure other women have early detection and don’t end up with severe stage 4 endo like myself.

What is your mission and some of the resources that The Yellow Cape provides?

Tara: Our mission is to change the way endometriosis affects our communities by providing education, support, and resources, with a primary focus on early detection.
We are also starting a Men’s Support Group called the Men of Endo, and will eventually have family support groups available. We have much more so continue to watch as we grow and mature!

Did you start The Yellow Cape after realizing a need for local resources?

Tara: Yes, a lack of local resources was one of the stronger drivers for starting the non-profit. After the 1st Worldwide EndoMarch in Washington, D.C., I was so incredibly motivated but felt like I really didn’t know where to start or how to make a difference in a huge organization. I decided to narrow my focus and start by making an impact in my own community. I couldn’t believe the lack of resources including the lack of a simple endometriosis brochure. That is when I realized the level of opportunity we have here in Delaware.

Was there a particular experience during your endometriosis journey that influenced your role as an advocate?

Tara: One experience I had was getting the insurance company to cover my treatment medicine, Zoladex. After 9 months of receiving the medicine without any issues, I received a letter stating it was “experimental” and they would no longer cover it. Instead of accepting that, I pushed back because it didn’t make sense and I didn’t feel like it was the right thing to do. I started making calls and asking a lot of questions. I found out about an appeal process and immediately applied. I represented myself in appeals court (telephone) and simply provided evidence and factual information about the success I’ve had. My doctor from RAD submitted medical proof as well. I was so happy to win the appeal and because of my effort, they passed Aetna Billing Code 11980 to cover Zoladex for Aetna subscribers battling stages 3 and 4 endometriosis. I’ve since helped a dozen women through the appeals process; even with other insurance companies. I call it being “Professionally Persistent”.

What are some of your proudest accomplishments?

Tara: One of my proudest moments was being a guest speaker at the Worldwide EndoMarch in Washington, D.C. I was able to share my story in front of so many people and most importantly, with my mom and family watching back home.

Other proud moments include holding my own Endo Awareness Events in 2015 (Dover), 2016 (Delaware City) and 2017 (Newark). We started with just under 100 attendees the first year and we’ve grown to nearly 200!
Lastly, Governor Markell traveled to our event in Delaware City and signed the proclamation I wrote/submitted, in person which was very cool! Signing this proclamation was the last one he would sign during his reign as Governor.

What’s something you wish people would understand about endometriosis?

Tara: I wish people would understand endometriosis is a destructive disease and probably affects someone they know. It’s NOT just a bad period; it’s excruciating pain that makes even the strongest person buckle at the knees. You can’t just take a Tylenol and feel better; believe me, we would! Pay attention to those around and when you see women unable to get out of bed each month and in debilitating pain, remember endometriosis and ask them to research it. That simple request may save them years of misery!

What advice do you have for other women who are currently struggling with endometriosis and pelvic pain?

Tara: Don’t give up; there is a treatment option out there to help you. Don’t stop at a closed door or doctor who doesn’t believe you. Use your network for specialists in your area. There is not a “one size fits all” treatment plan and there are great doctors that may not be one of the “lists” in the endo community! You must find the doctor and treatment that’s right for you and if you don’t know where to start, email me and we’ll figure it out together.

How can RAD and the community support you The Yellow Cape?

Tara: The greatest need we have right now is community support. Spread the word about our non-profit and about endometriosis. Remember the symptoms and if you know of someone that may be suffering from endo, have them reach out to us. It’s private and we’re happy to help them figure out next steps.

Outside of that, we’re looking for volunteers across all different types of skill sets/backgrounds from technical design to event staff. If this is something you are interested in, please reach out to us.

Your motto is “No one should have to fight endometriosis alone,” what do you hope to accomplish in the future with The Yellow Cape?

Tara: My overall goal for TYC is to create awareness within our community and ensure resources are readily available. I want to finish implementing a program within our area high schools and colleges because that’s where early detection really starts. When a woman first gets diagnosed, I want to have a support system ready to help her including a helpline, newly diagnosed information package to mail out, support groups and more. I want to continue to partner with our state officials to ensure they understand the importance of being able to receive affordable and accessible healthcare.

And finally, I want to do something to stop the suicide rate within our community and together, I know we can do all these things.

Tell us something people might not know about Tara Hilton!

Tara: Just a small town girl, living in a lonely world…she took the midnight train going anywhere….  (You have Journey in your head now, don’t you?)

I’m from Wichita, Kansas and I knew very early on I was born to help people. I hated to leave my family but I knew bigger things were in store for me outside of Kansas. I’m a Banker by day and Endo Woman by night and a social butterfly somewhere in between. You may catch me at a wedding one day, garage sailing the next, and then as an emcee at a charity event on the weekend. I used to try and replicate Pinterest recipes and projects but that didn’t go so well so I went back to what I do best… working with the community.
I have a wonderful boyfriend John, two daughters, Bree (23) and Audrey (19), and I can’t forget our 4-year-old Doberman, Ruckus. I am always on the go but love it and wouldn’t change that for the world.

For more information and to connect with Tara, email theyellowcape@gmail.com.

Have You Taken Our Pelvic Pain Assessment?

It only takes 5 minutes and you will receive a personalized response from one of our endometriosis experts.
Take The Assessment